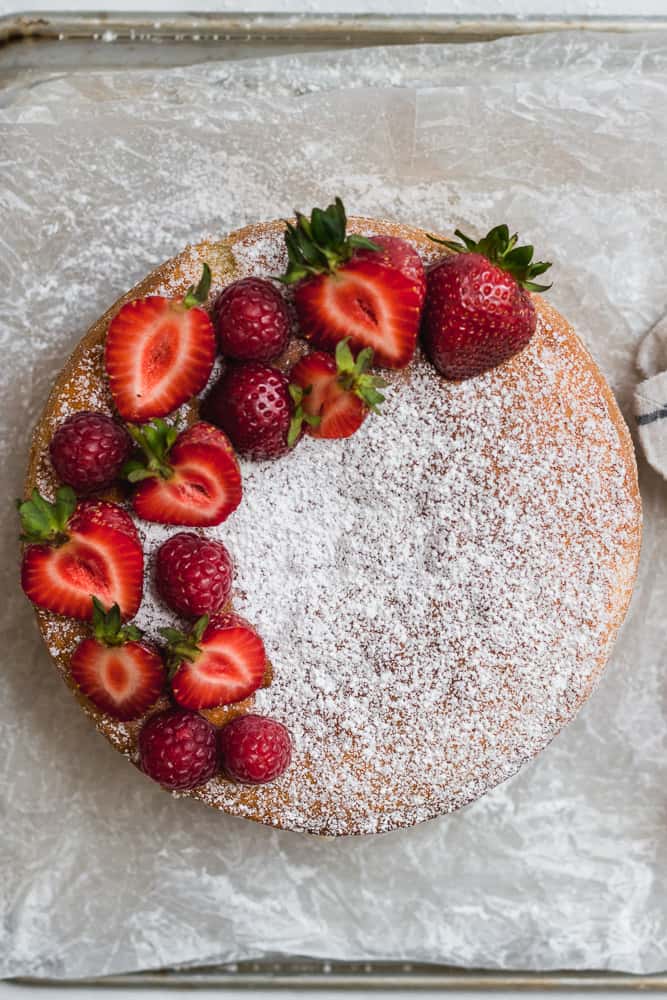 I started watching The Great British Bake-off (called The Great British Baking Show in the U.S.) a few years ago when we moved here and fell in love. It’s light-hearted and fun and combines baking, competitors cheering each other on, and loads of puns–what’s not to love?! I’ve also heard that several seasons of the show are on Netflix in the US. If you like baking, you should definitely check it out. It’s just lovely and will give you insight into some of the baking traditions of the UK.

A new season of Bake-Off is starting up in a few weeks. To celebrate, I’m gonna share some of my favorite British bakes. I’ve shared some before, but I’ve got a loooong list of all the awesome baked goods that I’ve learned to make (and want to learn to make) since moving here. Stay tuned for more in the coming weeks! 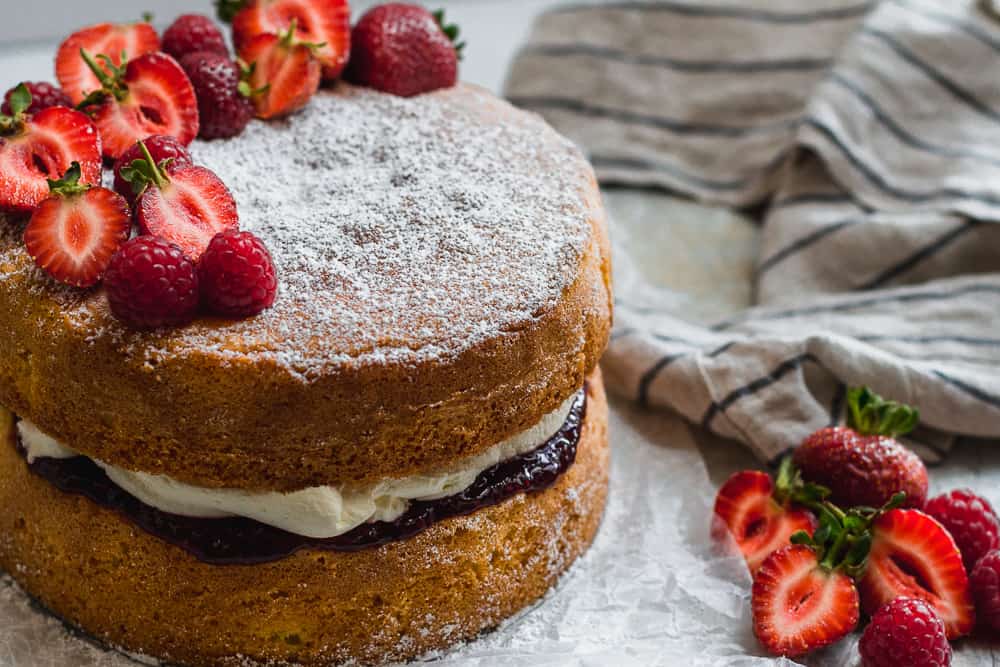 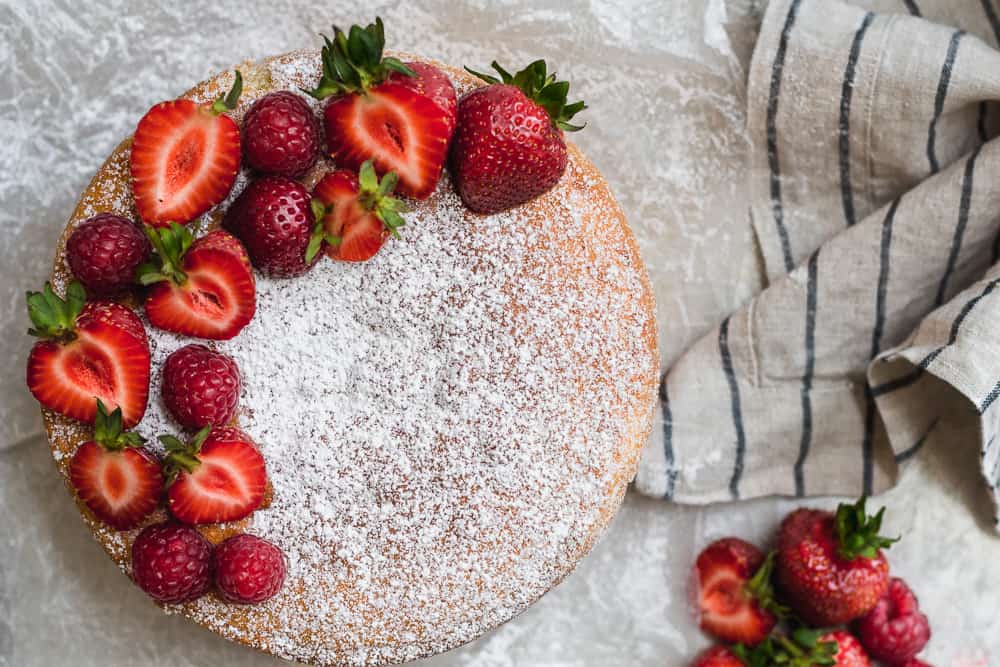 I love learning about the cooking and baking traditions of other countries and cultures. It’s been one of the most exciting things about living outside of the states. I read British cookbook authors and I’ve asked my baker friends to school me on British baking. And yes, there are quite a few differences between US and UK baking. I’ll get into some more of these differences during this series. 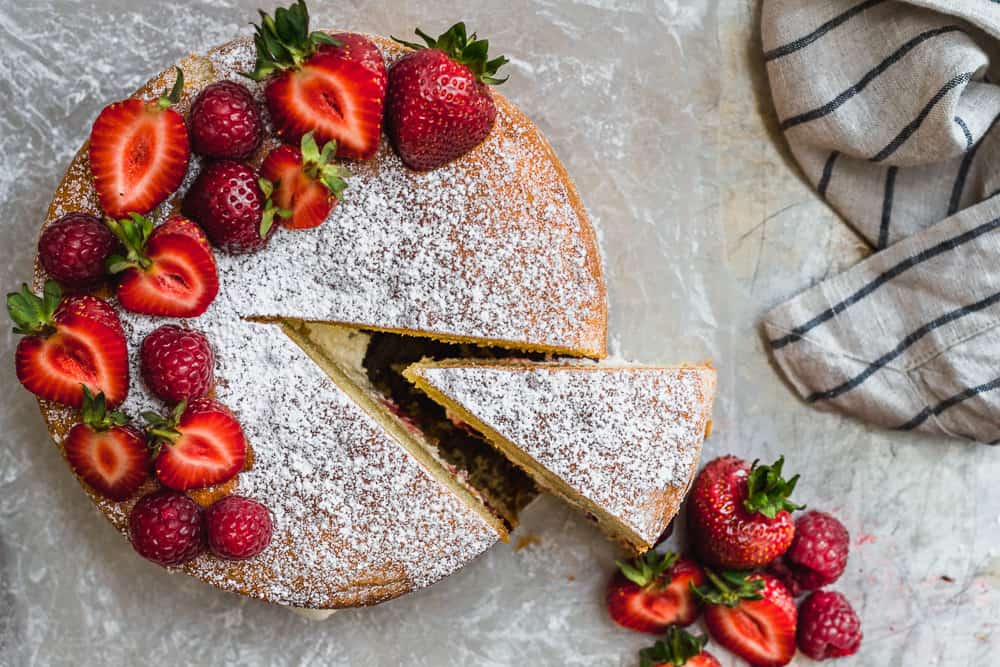 Today we’ll start off with a British classic: the Victoria Sponge Cake.

The victoria sponge cake is one of the first British bakes that I learned to make. It’s a classic British cake, named after Queen Victoria, who is said to have enjoyed this simple cake with her tea in the afternoon. The cake is made up of two layers of airy, vanilla cake with a layer of softly whipped cream and bright jam sandwiched between them. Because of the layers and filling, it is is also commonly called a Victoria Sandwich.

In my recipe for Victoria Sponge, I do deviate slightly from a few of the traditional elements of this cake. I do this more out of convenience and preferred technique than anything else. The end result is very much in keeping with the classic Victoria sponge. 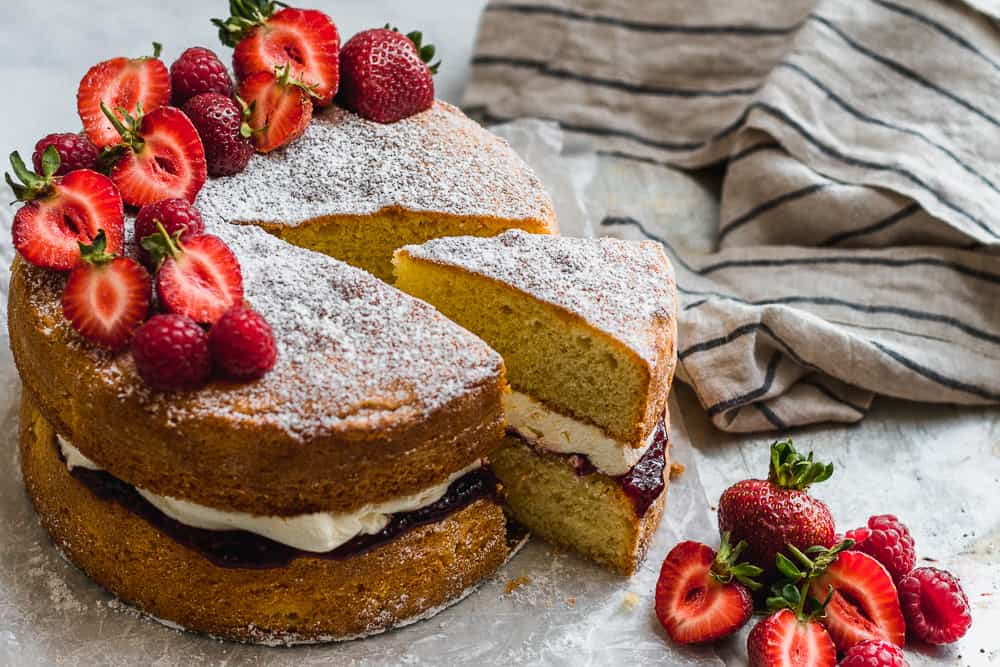 First, traditionally, this cake is made with self-raising flour. This is the most commonly used flour here in England for any baked goods that rise. As indicated in the name, self-raising flour has some leavening agents already incorporated into the flour. It’s more difficult to find in the states, so I’ve used all-purpose flour with additional leaveners.

Second, as far as I’ve found, recipes for this cake don’t include salt in the dry ingredients. I’ve added a little bit of salt to my recipe because in my opinion all baked goods need salt. Salt brings out the other flavors and makes them more of what they already are. It makes a huge difference. Use salt. You’ll thank me.

Finally, traditionally, this cake is made by dumping all of the ingredients into a bowl and mixing–yep, all of the ingredients. Butter, sugar, flour, eggs, all go in the bowl and get mixed up. I’ve seen people do this and the cakes come out beautifully, but I just can’t bring myself to do this. I use the traditional creaming method, sugar and butter first. Then the eggs are added in, followed by the dry ingredients and a wee bit of milk and vanilla. 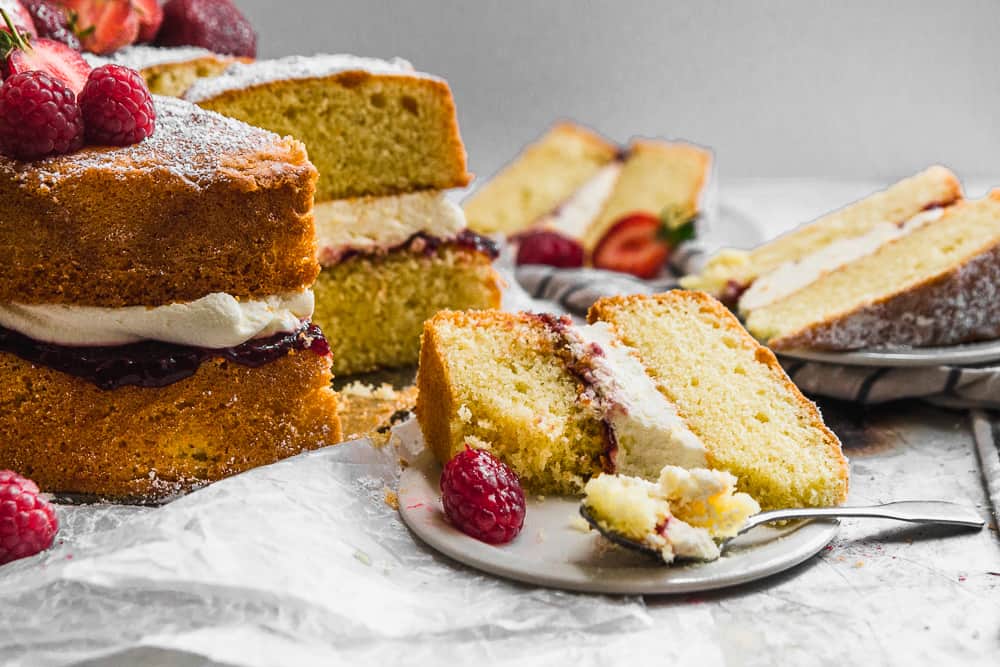 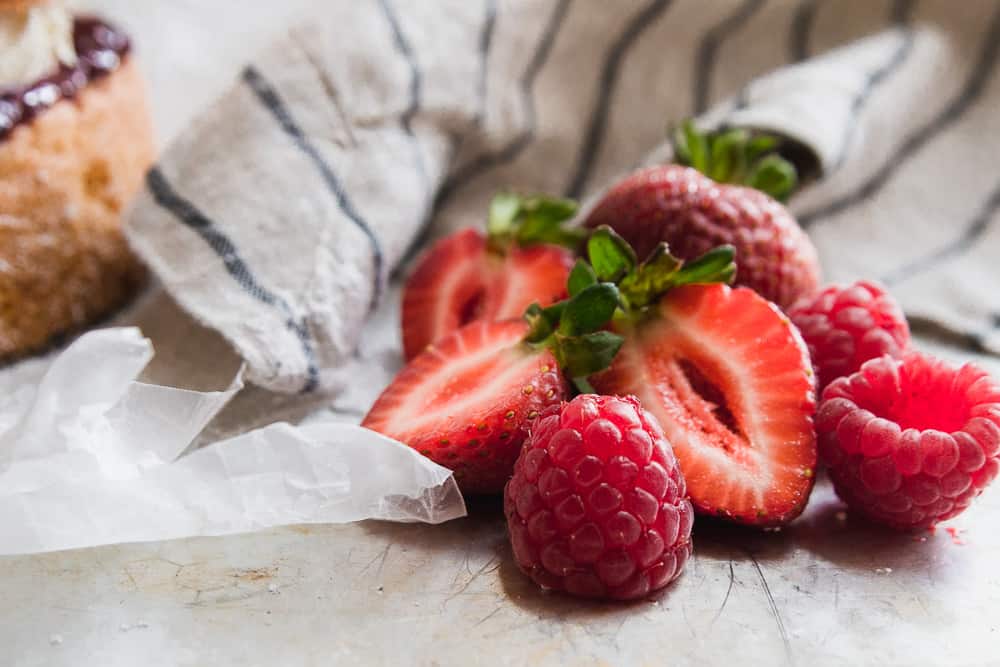 It’s easy to see why this cake is a classic in British baking. It’s really simple to make, using ingredients that you likely already have in your fridge and pantry. The light, airy sponge layered with soft whipped cream and tangy jam isn’t overly sweet, making it the perfect slice with a cup of tea. 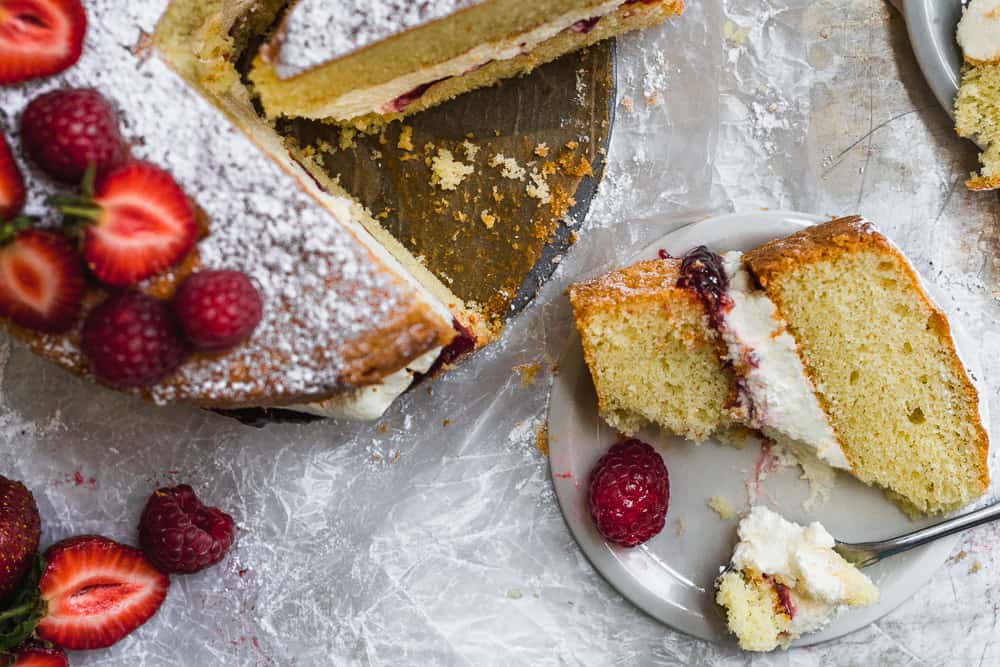 Do you have any particular British bakes you want to see here? Let me know in the comments!

This Victoria Sponge Cake is a classic in British baking. It's simple to make, using ingredients that you likely already have in your fridge and pantry. The light, airy sponge layered with soft whipped cream and tangy jam isn't overly sweet, making it the perfect slice with a cup of tea!

For the Victoria Sponge

*This cake is very delicate. If you open the oven before 20 minutes, I can almost guarantee you that the cake will fall dramatically in the middle, leaving you with craters that look un-servable. Don't rotate or turn the pans, as you usually would. This cake will dry out a lot if you over bake it so check it every 1-2 minutes after the 20 minute mark. The sweet spot in my oven is 22 minutes, but it could be a little more or less for you.