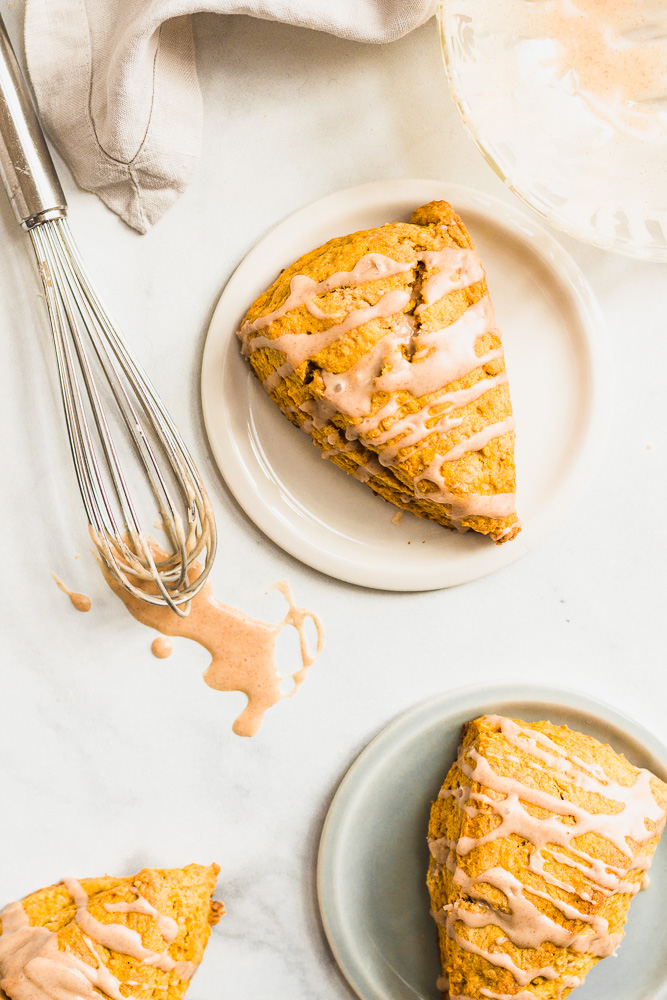 Last week, I began to ease into Autumn with my maple pepper drop biscuits. But this week, it officially feels like Fall. There’s no endless summer here in England and today is proof. It’s dark and chilly, the wind storm Ali is raging outside. I’ve lit my candle, I’m drinking spiced tea, and I’ve put pumpkin scones in the oven. 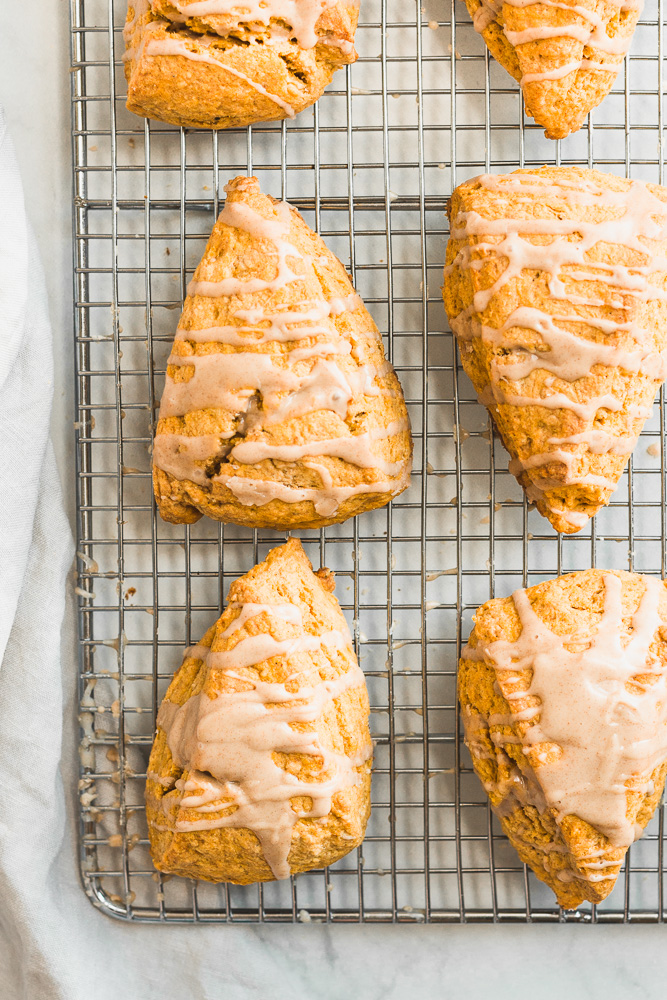 I struggle a lot with the darker days that will accompany the next 6 or so months. The darkness is creeping into the evenings earlier and earlier, and the gray skies are settling in. I love Autumn, with it’s crisp air and warm drinks, but for the last few years it’s meant the beginning of long and difficult seasons for me. The lack of sunlight and crazy short days have hit me harder in England than they ever did in Boston. If I’m not careful, the dreariness can envelope me like a fluffy blanket. I won’t emerge from my deary cocoon on the sofa until mid-spring.

This year, I’m thinking ahead and implementing some tactics to help deal with the impending gloominess. I’m figuring out ways to combat the grey days early on. Some are practical, like light therapy & vitamin D. Others are based on mindset, like focusing on the coziness of Autumn and all the wonderful things the season offers. 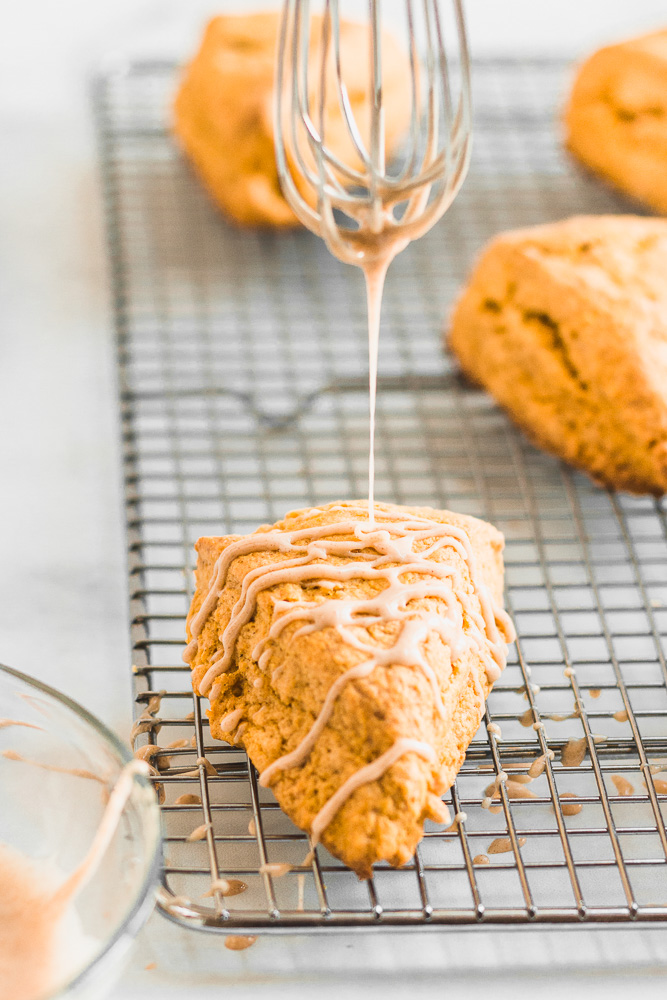 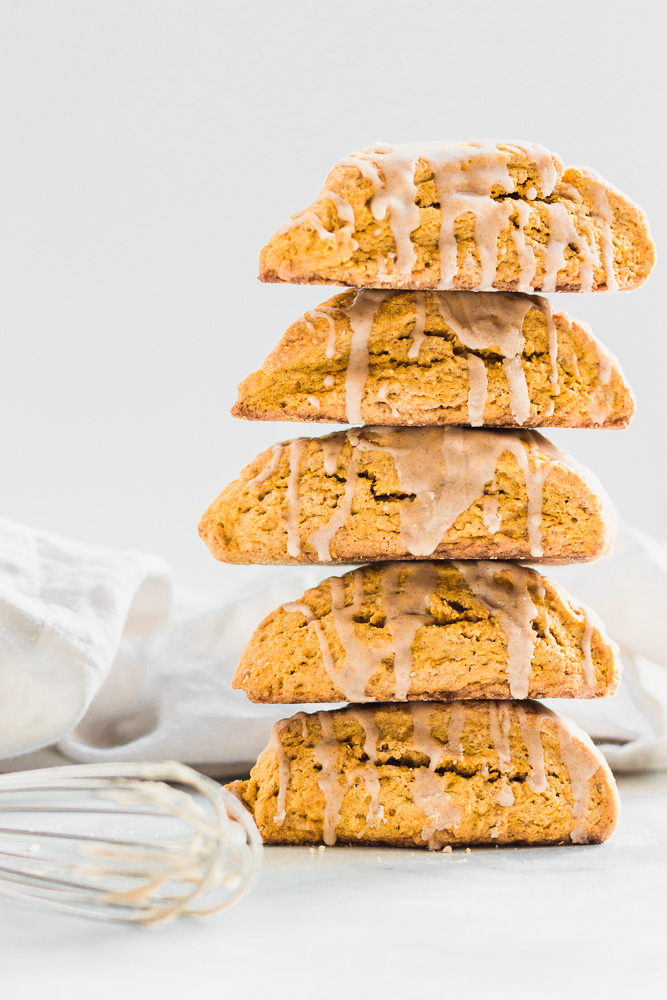 This is an unapologetic hybrid bake. I merged my very American preoccupation with pumpkin with the quintessential British scones. These golden fluffy scones might not be your standard British scone, but they maintain the integrity of the British bake–not too rich and perfectly tender & fluffy.

Sometimes pumpkin baked goods lack a pumpkin-y flavor and taste like hints of pumpkin and spices.  Not these babies. These scones are filled with pumpkin flavor. To give them that full pumpkin flavor, we cook down the pumpkin by half in a non-stick skillet or pan. Cooking off the moisture helps this recipe in two ways: it concentrates the pumpkin flavor, and it ensures that the scone mixture isn’t too wet or dense. A mixture of cinnamon, ginger, cloves, & nutmeg give the dough a heavenly scent and a little drizzle of maple cinnamon glaze send the autumnal feels over the top. 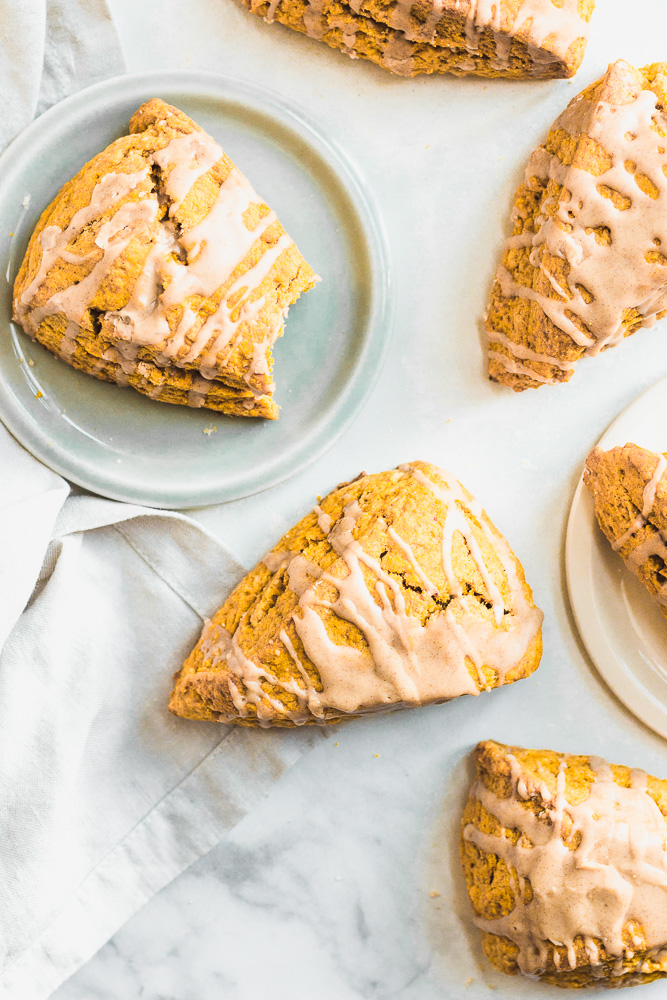 These pumpkin scones full of pumpkin flavor and autumnal spice! There fluffy and perfect warm from the oven with a little drizzle of maple cinnamon glaze.

*I keep a measuring cup next to the skillet as I'm stirring and periodically measure the pumpkin when it looks like it's reduced to almost 1/4 cup.